Background to IUNFC’s work – this webpage is under construction.

Planting legumes can increase the nitrogen in the soil as on their roots small nodules form which contain nitrogen-fixing bacteria which are able to ‘fix’ nitrogen from the air into a form (as ammonia) which can be used by plants.

The legume pigeon pea is one of the most important crops in drylands in India, but suffers from inconsistent yields and poor nodulation by ineffective rhizobia (the nitrogen-fixing bacteria associated with this plant). Our aim is to improve selection of optimal plant lines and rhizobial inoculants to increase plant growth and grain yield for use in drought-stressed Indian soils.

Photo 2 (above) Pigeon pea (Cajunus cajun) growing in the Alfisols of peninsular India. 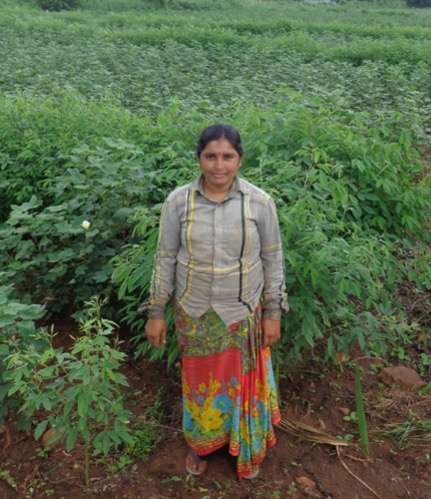 Quantification of how much nitrogen is derived from nitrogen fixation versus uptake of soil nitrogen is a key to establishing the success of biological nitrogen fixation (BNF). This needs to be carefully quantified in arid regions for rain-fed pigeon pea. Measurements of the contribution of native and of inoculated competitive rhizobial strains, as well as selection of superior rhizobial strains, will enable the inoculant industry to deploy these strains and thus translate to sustainable increases in yield.

Photo 3 (above) Farmer and her pigeon pea crop.

Phosphate solubilising microorganisms (PSMs) are known to facilitate legume-rhizobial nodulation, and co-inoculation of crops with Rhizobium and PSM has additive effects on plant growth and crop yield . Therefore, to optimise nitrogen fixation we propose to incorporate phosphate solubilising enzymes into rhizobia and pseudomonads using synthetic biology to place them under the control of phosphate-sensitive and rhizosphere-specific switches.

Rice and legumes (as green manures) have been grown in rotation in India for hundreds of years. It has been found that significant numbers of rhizobia will infect both a legume to elicit root nodules and infect rice as an endophyte. These bacteria represent excellent models to understand the similarities and differences in the infection of legumes and cereals by rhizobia. They also have enormous importance in our goal to transfer significant diazotrophic nitrogen fixation to cereals.

Photo 6 (above) Pigeon peas growing next to rice.

IUNFC’s scientific goal 3
To study how rhizobial diazotrophs infect cereals. This has the additional long-term goal aimed at improving nitrogen levels delivered to cereals without detrimental effects on the environment.